It’s been about a week since my last post, and much has happened my friends. Lets cover business first. It was not a very work-filled week to say the least. After the lovely rainy Monday, we had an exceptionally hot Tuesday. Coincidentally, Tuesday happened to be the day that we set off to physically discover where all of the schools we would be working at were located. The sadistically searing sun savagely scorched me during my travels, and I probably sweat out about a metric ton of water. But I found them all! No problems! So that was cool. After that I headed to the GEC to sit around and do nothing for the rest of the day. The next day was rather boring. We had no particular task other than to be at the GEC all day, so our work day was what we made of it.

Wednesday night, however, was a different matter. KAJET, which is the kyoto association of jets (prefecture, not just city) was having an even in kyoto starting at 6pm. Bar crawl kind of thing. I was unfortunately late for this event, but for a good reason. Mr. Joel Benjamin Crabtree was in dire need of assistance moving all his new (used) furniture from one place to another. So after work we both headed to Steffan’s (UK guy, pretty cool) place to pick up all the items. The game plan was to have the moving truck show up at 6, get the stuff over to Joel’s, then join the KAJET event later.

Cultural Time! Punctuality is extremely highly valued in Japan. Trains are not late. Buses are not late. You are not late for work. Delivery drivers are not late. LATE IS EVIL. That’s Japan punctuality in a nutshell, so you can imagine the surprise that Joel and I experienced when the truck did not show up at 6:00. Or 7:00. Turns out this guy thought he was supposed to be there the following day. Unfortunately, the one who arranged the pickup time was a former JET who was back in the UK at the time, who booked it using a person who called the transportation guy. Basically all communication had to go through 4 people.

So in classic Japanese fashion, we decided to bide our time by drinking and eating friend chicken from a convenience store. Anywho, the guy showed up with this tiny little japan excuse for a pickup truck, and we loaded it up. Joel traveled with the delivery guy and I took a cab over to his place. After being lost for a short time, I was able to meet up with Joel back at his apartment complex and we proceeded to move almost everything upstairs (we may have missed a piece [which Joel found the next day])

So anyways, we then met up with the team at a bar called Ing. There we met some people, drank some beer, and departed for my new favorite hotspot, the Kamo river (Kamogawa). At the river, I had the lovely opportunity of giving my first mini lesson in English. I basically helped a girl (who I now know as Kuna-san) with a statement of purpose for a job application. Fun stuff.

Thursday was just another day, I think I did some shopping after work (Bought an iron, ironing board, a rice cooker, and various odds and ends). Friday was pretty tame as far as work was concerned. We did some more paperwork, met some of the Group B people (the next batch of us new guys), and watched some helpful presentations about how to do our self introductions to our students.

So before I go into my weekend here, let’s once again visit the happy food corner of my life! This week’s culinary adventure began with Korean food. I had this stuff: 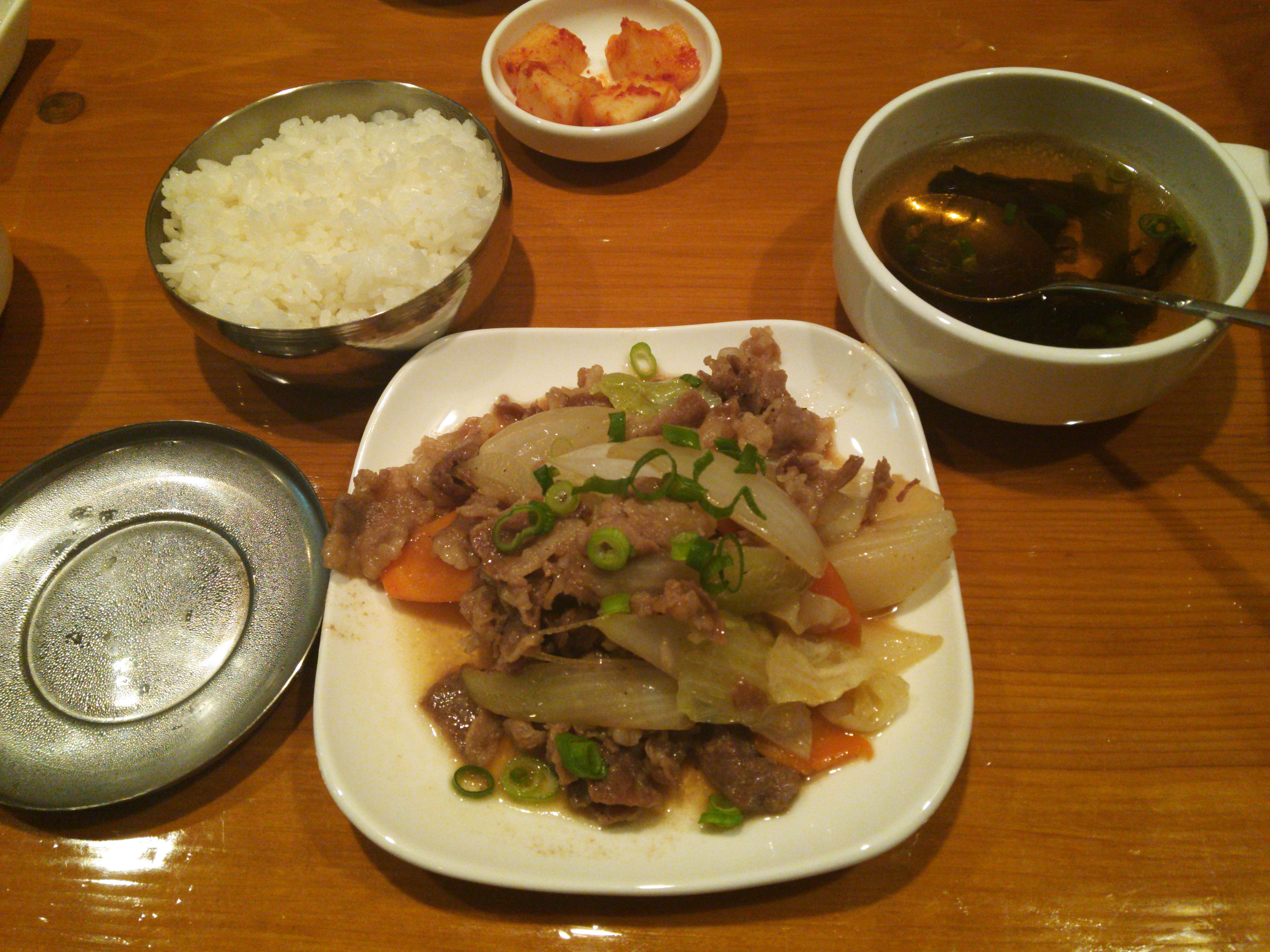 The next day we went to a sushi place, where Darren (UK) was kind enough to trick me into eating tuna with wasabi. Thanks Darren. I also had some sort of fish eggs: 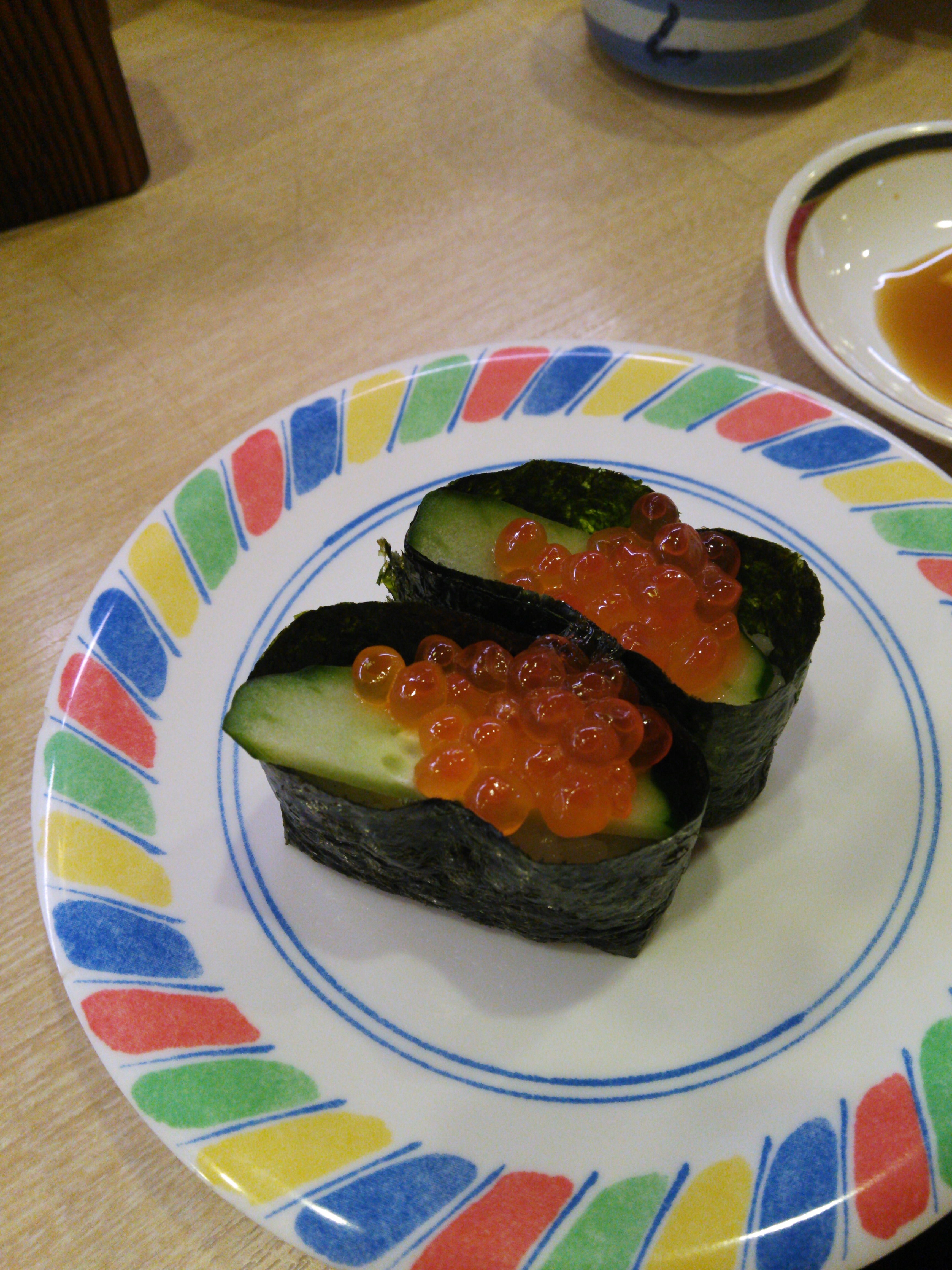 The neeext day (Friday now) we had Thai food: 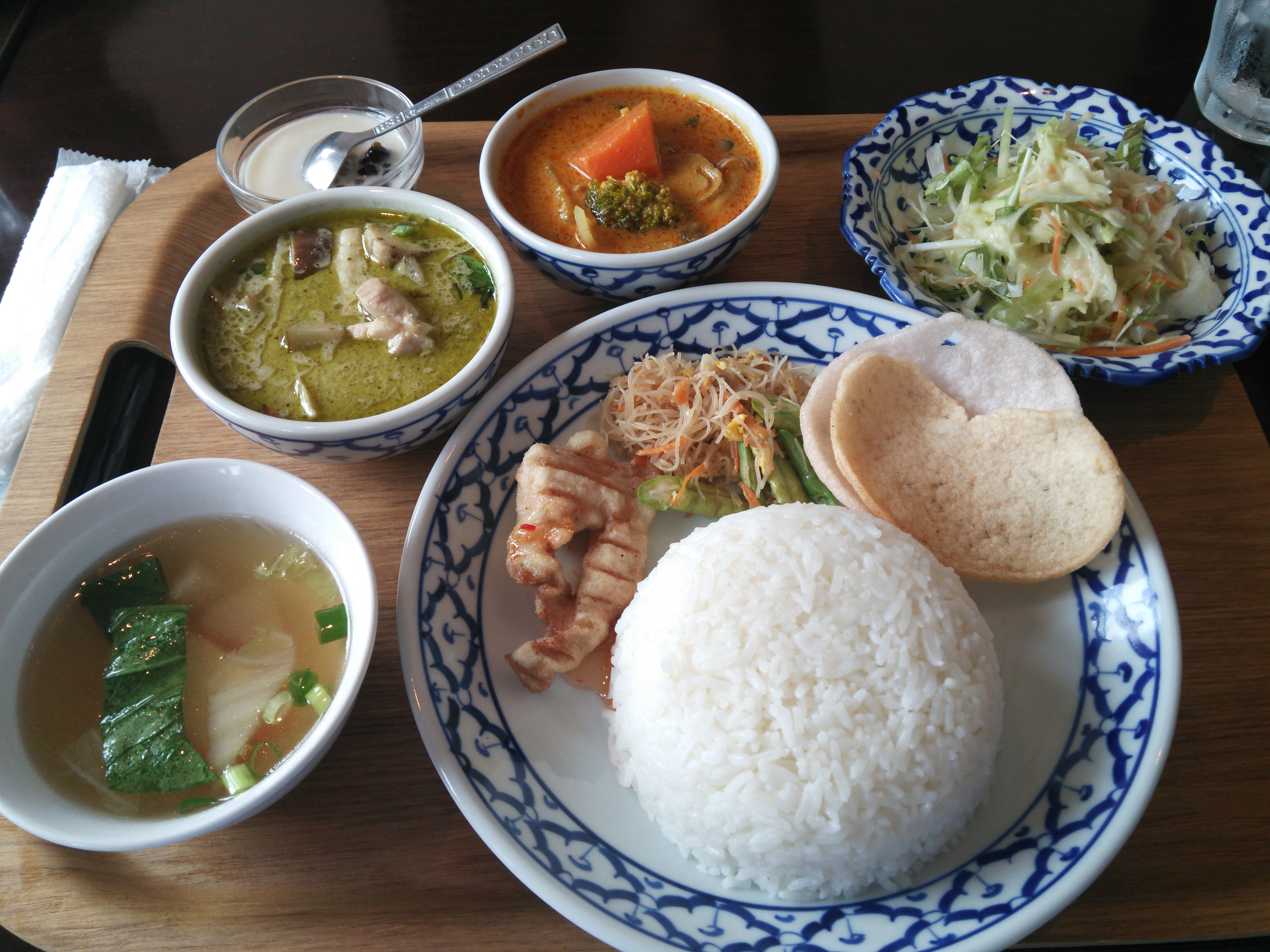 So Friday night. Blake (neighbor JET), Naoko (Blake’s wife), Patrick (neighbor JET), Kuna-san (That girl from before), and myself all met up at Uji, which is just south of where I live in Momoyama-cho. Uji was having a fireworks festival. They certainly do fireworks differently here in Japan. Unlike the 4th of July in the states where you can go anywhere to see them, people travel far and wide to observe fireworks, and deservedly so. This fireworks display was incredible! It literally went on for well over an hour, and they really knew how to put on a show. Did I mention it was crowded? 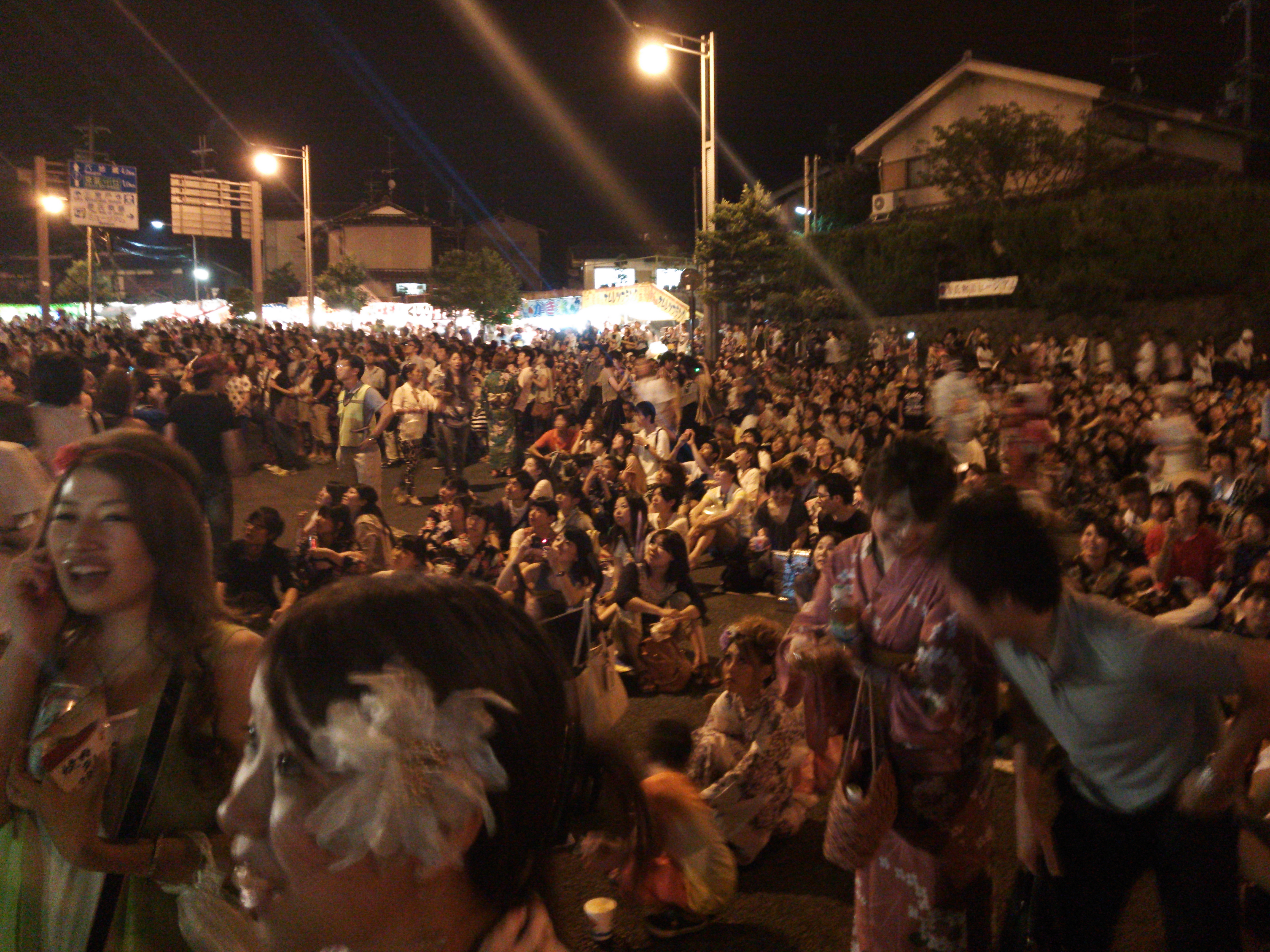 That evening I had some rice food thing, pineapple on a stick, and couple beers. After the fireworks we decided to give up on trying to get on the train at Uji (all those people in the earlier picture were taking the train too). Instead, we hoofed it over to the next stop on the line, boarded there, and headed for Rokujizo (a stop on my commute to my schools) to find a place to unwind a bit. We eventually stopped at a small bar called Zero, where we ate some Japanese bar food (like chicken heart and stuff) and had a few more drinks. I had the pleasure of trying a new mixed drink that consisted of Hermes Green Tea Liquor and Milk. IT WAS INCREDIBLY DELICIOUS! You should try it. I’ll be getting some for my stock here at my apartment.

Saturday was another roller coaster of a day. I woke up early and much to my joy, finally got around to doing a lot of cleaning that I was behind on. Yay cleaning. In the morning I got a call from a delivery driver from a nearby furniture store informing me when he would be stopping by (my first Japanese phone call!) to deliver my fancy new chair thing.

Due to the early arrival of my chair, I was able to meet up with Blake, Naoko, and Patrick again for a trip into Osaka (for what I thought was just dinner…oops). We arrived around 4:30 pm or so and headed up to a Mexican restaurant during happy hour for dinner. The place is probably about as Mexican as Japan can get, which according to Patrick, isn’t all that great. The sauce for Blake and Patrick’s dishes apparently tasted like pizza sauce. I ordered a chicken quesadilla (obviously), which tasted surprisingly similar to back home save one detail. They put jalapeno on EVERYTHING. Seriously overboard on the jalapenos Japan, just because it’s mexican doesn’t mean it needs more jalapenos.

Anyways after I ate jalapenos with a side of quesadilla, we did a little bit of shopping. I found a music store and spend all my time there wishing I had a piano and a trumpet at my place, and screwing around with the Japanese dj software. I did manage to find a guitar stand for only 800 yen (8 bucks), so that was cool.

Post shopping we headed out to see the Osaka fireworks (which was a surprise to me). If you thought the Uji place was crowded….ohhh man. I’m pretty sure everyone in Japan was there. Here’s one picture, but please refer to the picture page on this website for more, it really was incredible. 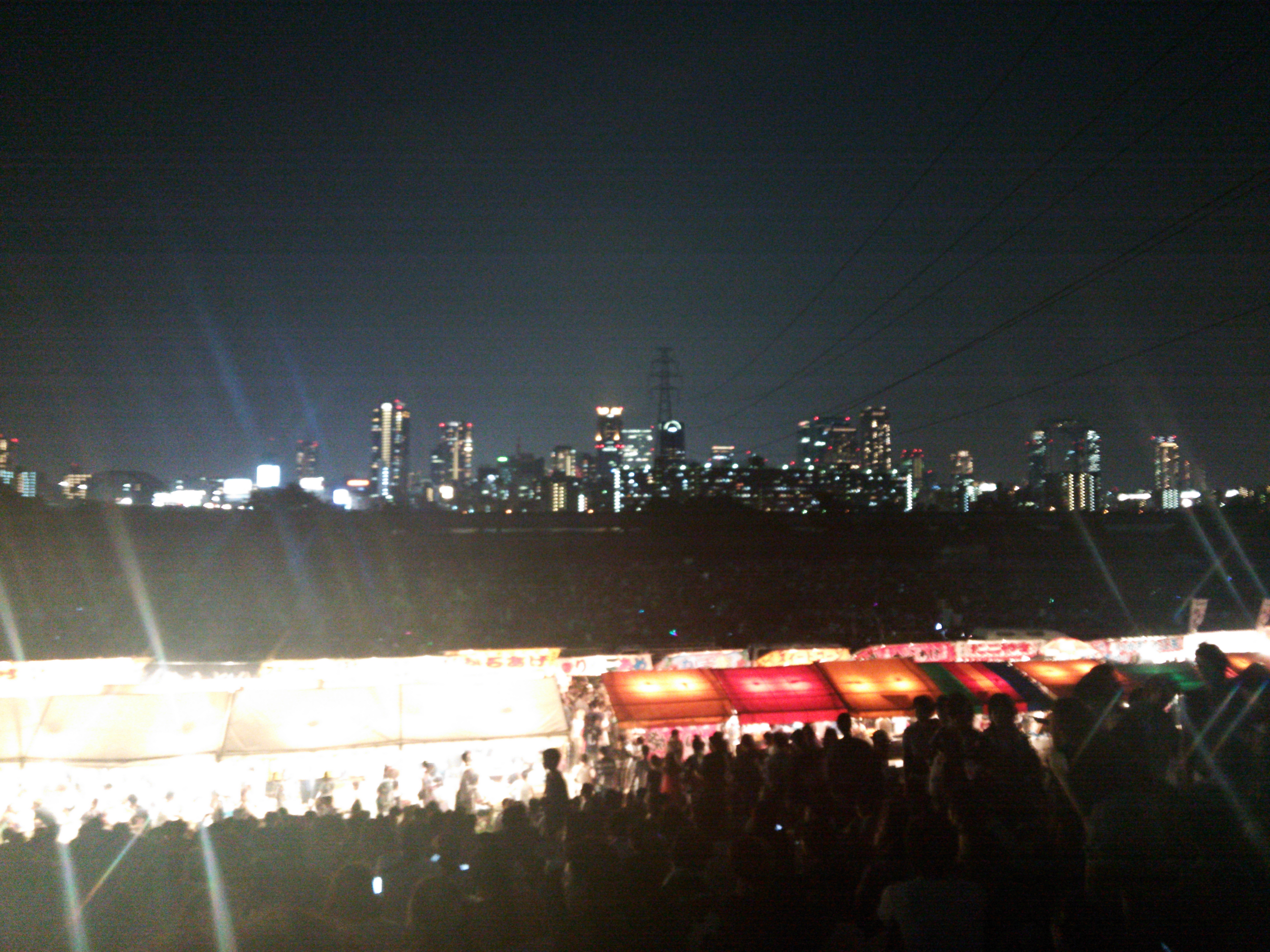 People everywhere! And the Osaka Skyline

Easily one of the most impressive fireworks displays I’ve ever seen, and it’s definitely in my top 3.

Near the end of the fireworks we met up with Naoko’s friend Yumi-san, who hails from Nara (one of the places I intend to visit). With her we went to a bar in Osaka to unwind again. We had a few drinks, talked and laughed, then headed home. It was a lovely evening to say the least.

So finally, I come to today. I did nothing important, and it was awesome. Woke up late, took a bath, played some games, watched a movie… amazing. I did take a short trip downtown to pick up various spices and dishes from another JET named Alan (UK). He had some leftovers stuff that a former JET left behind, so I got it for free, which is cool. After picking out what I wanted, Alan and I went to get some food. We went to some restaurant Alan liked only to find that they weren’t open yet. Plan B consisted of the other restaurant in the building which seemed to be….deserted. We seriously walked into this place, a loud speaker said the Japanese equivalent of ‘welcome’ and we couldn’t find an employee anywhere… It was almost like the place was closed and they just forgot to turn off the lights and lock the door. Weird. Soo we just went to some burger joint that had mediocre burgers and I headed home to continue to do nothing for the rest of the day. So here I am! That was fun, sorry for another crazy long post. Hope all is well!