This week was a magical one. It’s been nice to be able to take a bit of a break and spend some time getting myself settled in here, and it was all due to having this week off. Kyoto-shi is celebrating a festival commonly referred to as O-Bon, which has it’s roots in the Buddhist tradition of honoring one’s ancestors. It’s a three day festival, and because of it (I think) the board of education was closed.

Monday I finally got a chance to do some more karaoke, joining a few other JETs at a place called rainbow karaoke. Twas a grand ol time, and one of the veterans gave a heartwarming rendition of this which is hot stuff around these parts…I guess. Anyways, it was lots of fun, but an expensive night.

Which brings me to Tuesday! This was day I realized I was pretty much out of money. So I did nothing. Brilliant. So Wednesday I finally got a chance to go to Lake Biwa, the largest and oldest lake in Japan (estimated to be around 3.5 million years old). The beach was a bit crowded, but the water was perfect. I mean perfect. The temperature was wonderful, the sun was out, there were mountains in the distance, and the lake bed was extremely comfortable to walk on. Lake Biwa is definitely a place I plan to visit more often in the future. Side note, turns out jet-skiing is totally allowed on the lake, SO GAME ON! (When I have money….) After the lake, we all headed home and I proceeded to do some more nothing. 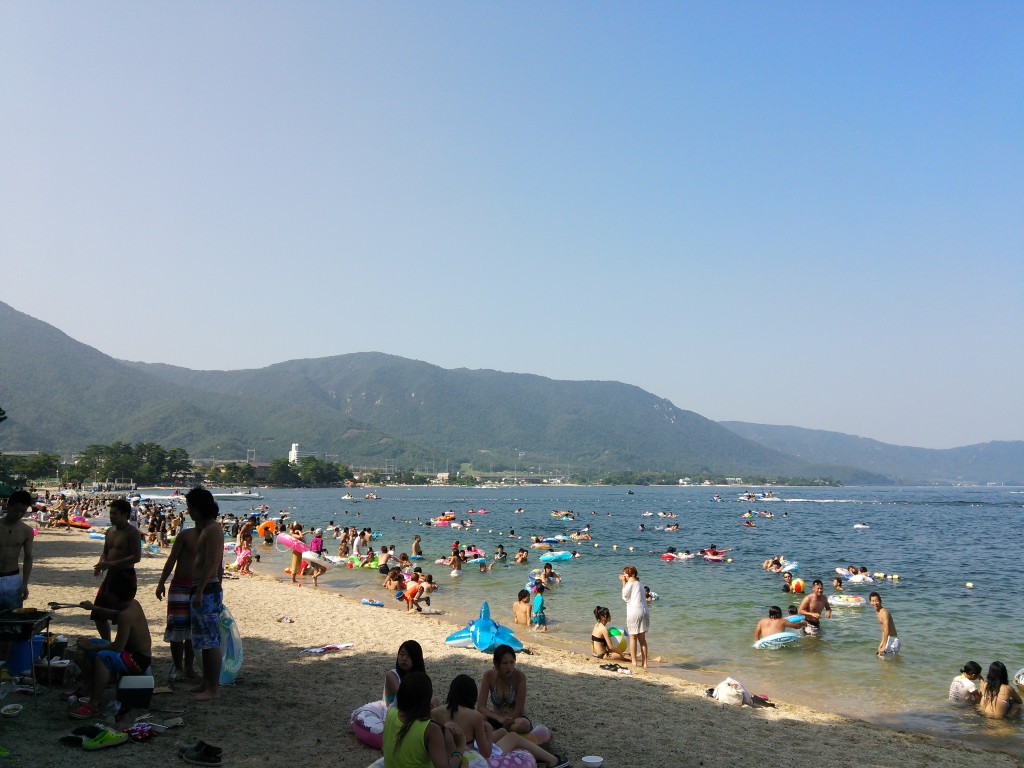 Thursday was another day I was intent to stay in and finish all my laundry and cleaning (due to lack of funds for adventure), but Mr. Joel Benjamin Crabtree and his wife Mrs. Natalie Jean Crabtree were planning on visiting a temple that had come highly recommended to me by one Mr. Franklin Ishida. So I found myself exploring the wonders of Kiyomizu-dera. This temple was founded back in 778. Ya, 778, so about 1235 years old. Apparently this Buddhist temple was among the top 21 finalists for the new 7 wonders of the world, read here. We went during a special night opening, which only happens about 5 times a year. As you approach the temple, you can see a great light shooting forth into the sky from the temple grounds. Look in the pictures and you’ll see what I’m talking about. This place was incredible. The architecture was astounding, the beautiful forests were illuminated, and the artistry and craftsmanship of the entire shrine was mind blowing. The place had a sort of profound power to it. Fun facts, Kiyomizu means clear (pure) water, and no nails were used in it’s construction. 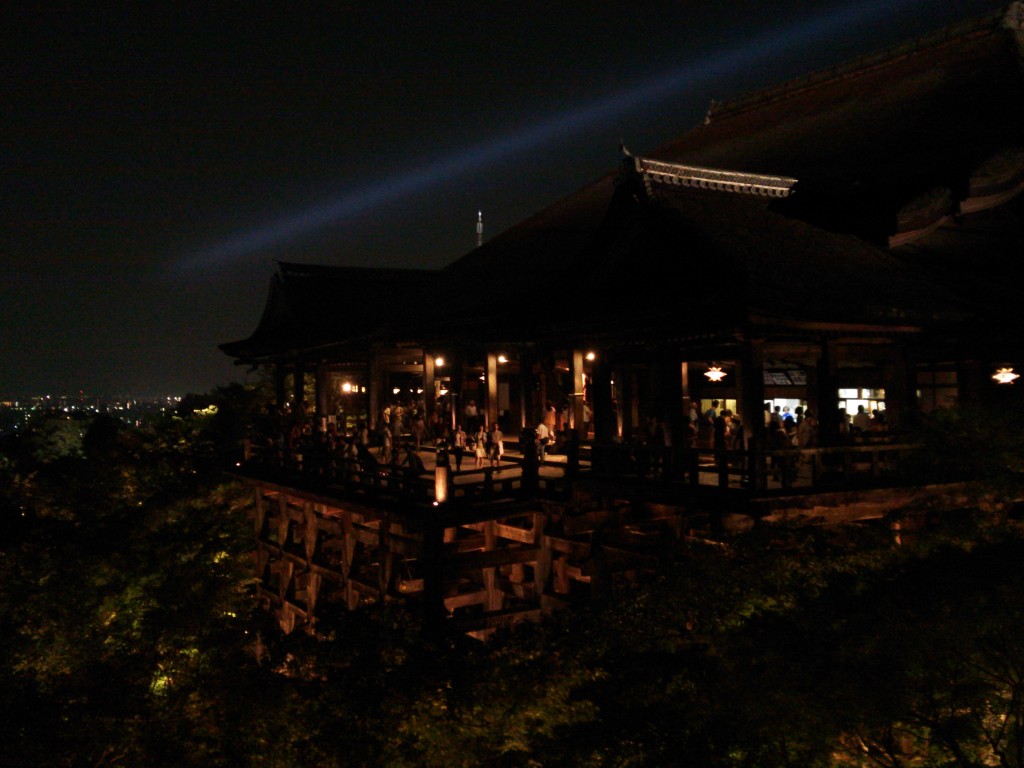 When we were at the temple, we stood in line to drink water from a fountain there, shown in the picture below. We were unaware at the time that this was actually called Otowa-no-taki, and is believed to have curative properties. Depending on which of the three streams you drink from, you are believed to be granted health, longevity, or wisdom (I drank from the wisdom one looking back). 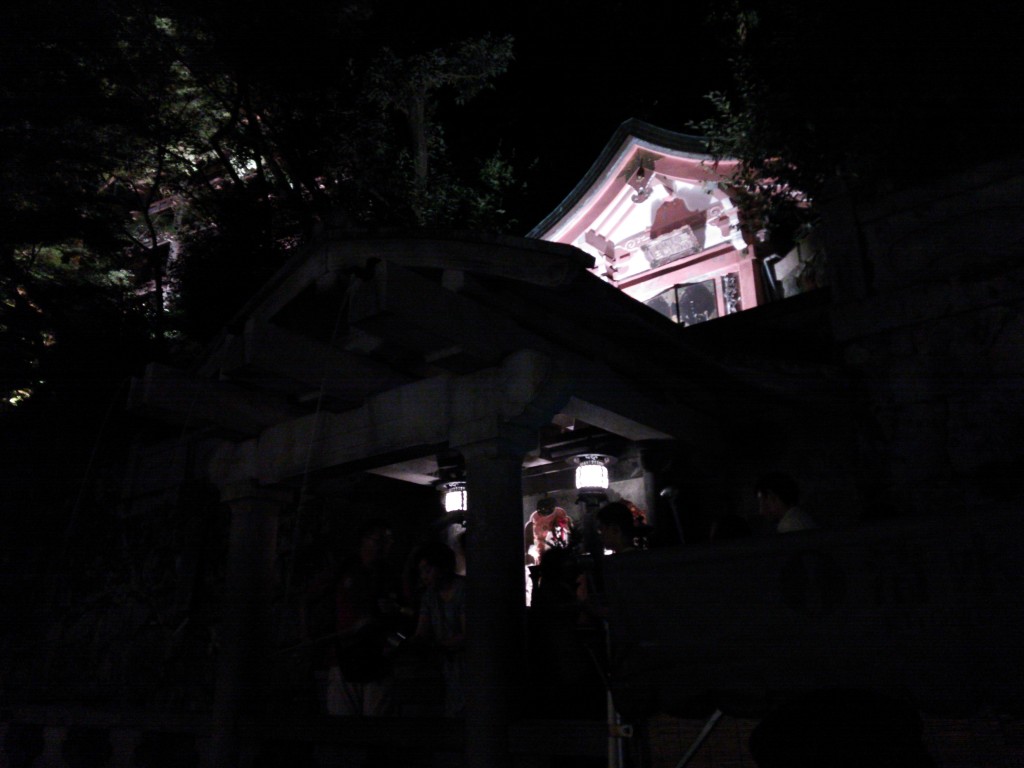 The same day we visited Kiyomizu-dera, we happened upon Ryozen Kwan-on, which is a massive statue of a Bodhisattva, and a tribute to the unknown soldier during World War II. I’ve got some pictures of that as well. 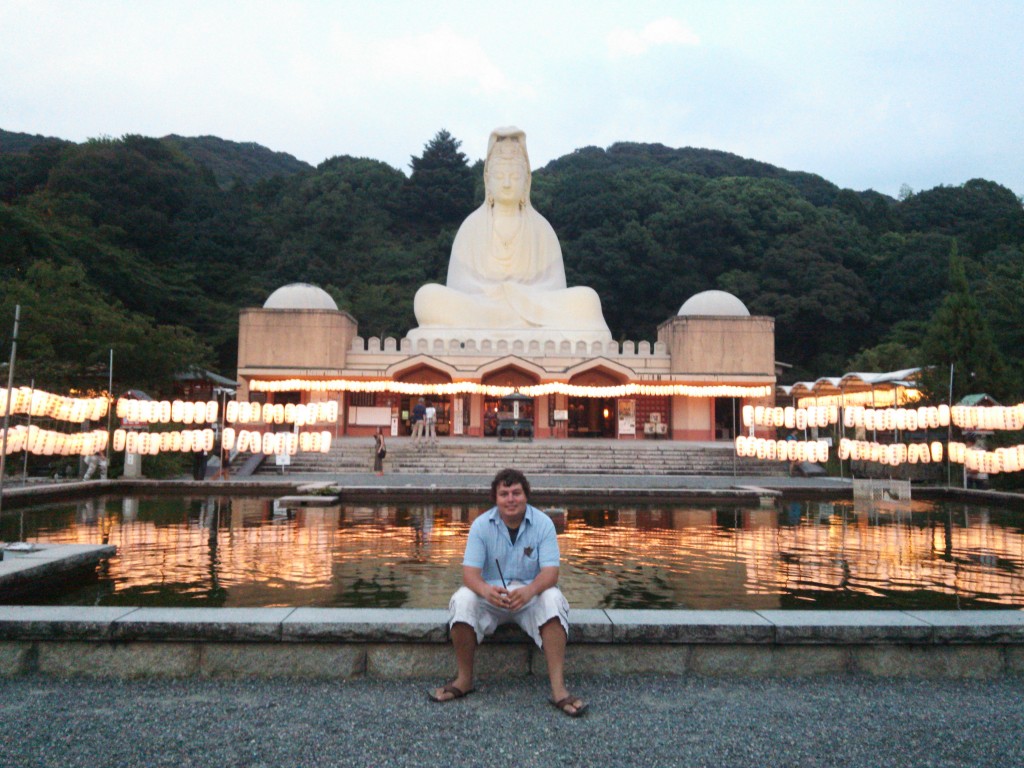 After all that, we ended up back at my favorite river spot again, where I saw a guy doing some fire stuff, and met some cool retired Japanese guy intent on teaching me a few words.

Last night was the final night of O-Ban, commonly referred to as Daimonji. Meeting on the rooftop of Joel and Natalie’s place, we had a wonderful view to the event where they light giant fires in the shapes of different characters, signifying when the spirits of the deceased (who have been visiting during O-Bon) return to the spirit world. It was truly remarkable. Due to only having a phone camera, I couldn’t get many good pictures, but I’ll try to get some for the blog sometime next week.

These are all the fires we could see (not my picture)

To give some reference to the size (also not my picture)

Afterwards Joel and Natalie welcomed everyone into their home for a few drinks and some good times.

As with all the blog posts, we come back to today. Twas another nothing day strictly due to financial restrictions. I literally need all the rest of my money for the train until my paycheck arrives. On the bright side, I was able to (for only $10, yay bargain shopping) attain goods that should last me until payday for food. I got this.

Thanks for reading everyone! Sorry these blog posts are always so long, please leave any tip/requests in a comment =D. Also get the app called line and add me as a friend (mvjohnson is my user id). Then I can text and call you from Japan, and that’s cool. Goodnight!