It’s been 10 days since the last update, apologies for that. Things have been a bit, uh…busy…ish.

The week of the 19th started orientation week for us city JETs. So first thing Monday morning all of us newfolk trotted over to city hall to introduce ourselves to the city hall board of education staff, which went smashingly. I think the only thing that sucked was the heat, which, for the record, was in the happy 100s for the entirety of orientation week. Thanks universe.

So here’s the rundown…

Honesty time was a fun one. This presentation (put on by two veteran JETs) was essentially a day in the life of an ALT, fo realz yo. We learned about the wonders of Kyushoku (school lunch) and a bit about the food culture in Japanese schools. In elementary schools apparently lunch is a bit of it’s own subject. Students are given a nutritionally balanced meal and are supposed to explain the various nutrients and why they are beneficial (at least I think that’s what I heard). Eating the entirety of the meal is strongly encouraged, and were I not to finish a Kyushoku I’d be setting a bad example. WHICH REMINDS ME of the other part. If you do Kyushoku in an elementary school, you eat WITH the students, so there’s that. 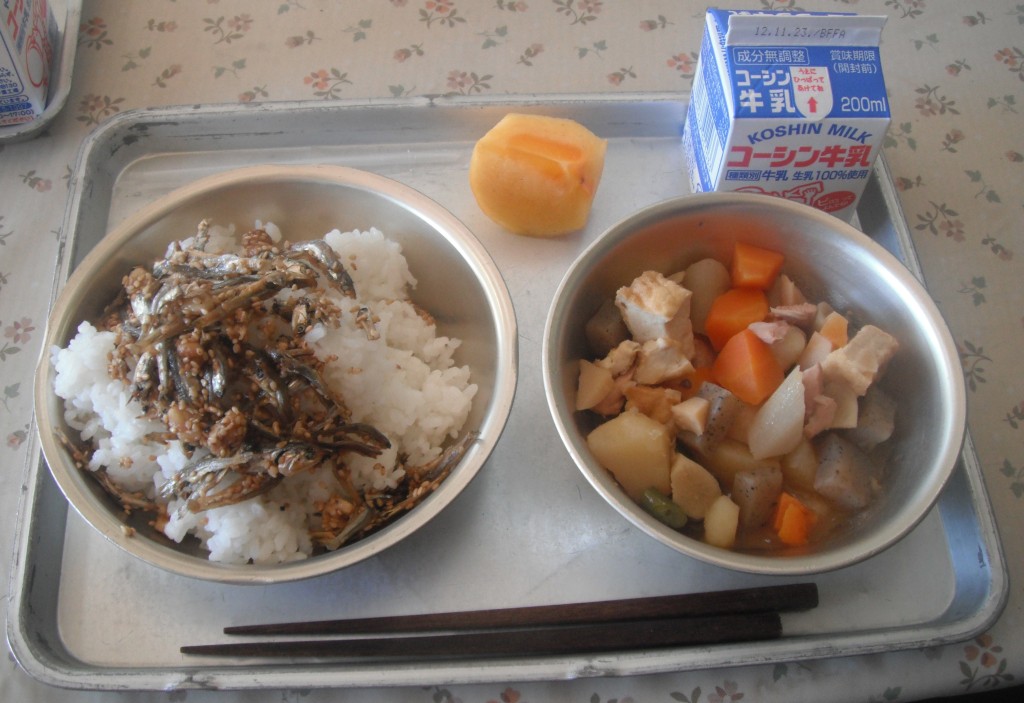 I picked the worst google had to offer…

Honesty Time also included various tips on how to survive in Japan. Buying shoes, how to dress, transferring money back home, and so on. It was the most festively cynical presentation the world has ever seen (in a good way, I enjoyed it a lot).

So for travel expenses, I spend about $8 a day riding trains here and there. Fortunately, I get reimbursed for it by the board of education, which is awesome (this is a new thing). The SHS presentation was an informative explanation of being a High School ALT, the JHS microteaching was how to teach in a classroom with a JTE.

For the Afrikaans lesson, a JET from South Africa gave us a class in Afrikaans so that we could experience what many of our students experience. This way we can know what it’s like when they are being taught English by a teacher using English. It was cool.

Wednesday – Presentations for SHS, JHS, and ES from the board of education, and round 1 of JET self intros.

The morning was filled with presentations about the goals of the foreign language educations program in Japan and what teaching in the schools should be like. These presentations were given by teacher’s consultants for each school level. The second half of the day was round 1 of us newbies doing our self intros for the vets to dissect.

This day was pretty self explanatory, we had example classes given to us target towards ES and SHS students. For the gender discussion we separated the men from the women, and had ‘the talk’, Japan style. It was….interesting… If you’re really curious I’ll tell you more elsewhere. After that there were more self intros.

Friday – ES Microteaching, Learning from Mistake, Special Needs presentation, Staying positive in Japan, and the last of the intros.

Soooo this one was interesting. We experienced a sample elementary school class, were taught how to work with special needs classes (which we all will have), and had two other presentations.

One can be summed up here: http://www.youtube.com/watch?v=hZeJgySra6g
Seriously, watch that.

The other (Staying positive in Japan) was about how culture shock might hit you, and how to cope with it when it does.

I’ve decided that everyone doesn’t want to read about every single time I go to a bar, so I’m going to try to keep all that to a minimum (no promises). Friday night we met up for a veteran JET named Jonathan’s birthday. After some pre-gaming at his apartment, we headed out for Butterfly, Kyoto’s hottest club (this place had everything {for those of you who don’t get it…click here}). Anyways, it was a dance club, it wasn’t terrible. After that I watched my new favorite soccer team Liverpool (by proxy) and got myself stuck in the city with some Australian guy name Dwayne. Essentially, I missed the last train home (because it might have been 3:30 am) and was forced to stay up all night waiting for the next train at 5 am. So what did Dwayne (the Australian guy we randomly met at the club who was in Japan for his brother’s wedding) and I do? Go to the river (big surprise) where we met and had a pleasant conversation with a German fellow named Wolfgang…all night.

So naturally Saturday I slept in, then pretty much rinsed and repeated. This time we went to an Izakaya style place. These Izakaya places are pretty cool. You go there with a group usually, order a boatload of different types of appetizers, and that’s about it. It’s almost like bar food, but better. Also, I ate some raw horse meat, so there. After Izakaya time, was karaoke time, where I was gently reminded by life that I’m not fluent in Japanese.

Sunday was a ‘prepare for your first real day of work’ day.

Just a bit of an aside before I go on to my first day. As per usual, my name is common. Honestly, I thought that if I left America and went to JAPAN, I’d get away from all the other ‘matt’ and ‘johnson’ people out there. Nope. There’s a Johnson and a Matt out here. Seriously, what the heck universe.

SO MY FIRST REAL DAY OF WORK! MONDAY!

I left my place bright and early at 7 am (take that old job), and commuted only 40 minutes (in your face again old job) on trains for only $4 each way (old job is getting owned). Got to work around 7:45 (had to be there at 8:25) and was nearly immediately greeted by a teacher who recognized me as the new ALT (I’m guessing it had to do something with the whole me being a shining beacon of America). He led me to the ‘Teacher’s room’ and closed the door behind him..leaving me outside…

So after an awkward minute a Japanese Teacher of English came to greet me! She (Ms. Nakabo) took me to meet the Kouchou-sensei (Principal) and Kyoutou-sensei (VP). I briefly conversed with them (after taking off my shoes and wearing these ridiculously tiny slippers) and was told that I would be introduced to the entire student body. They told me that I didn’t have to say anything and had to stand there and look pretty. After this short meeting, I went to the teacher’s room again to introduce myself to the staff during the morning meeting (every morning they have a 5-10 minute meeting to discuss stuff). After giving my lovely introduction in Japanese (and actually not screwing it up) I sat in the corner and pretended to know what I was doing while the rest of the meeting went on.

Not my Teacher’s room, but pretty similar

After the meeting, I met the other English teachers at this school (which is Ritsuryo Junior High School for the record), all of which deemed it necessary to tell me how bad the students are at English and discipline, and how much they hate English, hooray! (I’m actually looking forward to stepping into this ring.) At this point, a bell rang, and everyone left me. So… I just kinda sat there for 20 minutes twiddling my thumbs until some random teacher hurried into the teacher’s room to collect me for my introduction to the students.

So he leads me into this gymnasium, where all the students are sitting, and motions for me to step up in front next to the school principal (after taking off my shoes). The principal says a few words about me, then HANDS ME THE MICROPHONE! I was like a deer in headlights for a second…What do I say? In English or Japanese? How much do I say? Ahhhh! So in English I winged the crap out of my introduction to the students. I’m pretty sure the only thing they understood was ‘Chicago’. Ah well.

After doing that introduction, I went back to the teachers room and sat there for 3 hours. I tried to keep myself busy with planning, but there’s only so much you can do when you have no idea what you’re supposed to plan for. At noon I used my best Japanese to tell the VP that I had to go to a meeting at the GEC, and I left the school.

At the GEC we had our official appointment ceremony, and got a niftly little certificate saying how we’re the real deal. Then we got some drinks, and wend to some indian place for food. It was wonderful. Side note, I think it’s time to break out of the ‘anti-spice’ shell…

Anyways, to wrap it up, all I did today (Tuesday) at work was talk to the English teachers at my school about nothing important. We covered resale shops, ketchup (so maybe something important), and all sort of odds and ends. I’ve now been told at least 5 times that my school is full of rowdy kids. The real test starts tomorrow at Daigonishi ES, where I will actually be instructing my first class. Ohhh maannnn