It’s been about a week since my last update, so I figured it’s about that time… I’m sitting here at Kansyu Elementary School, having done absolutely nothing since lunch, and have found myself nearly nodding off…but I’ll get there later.

Beginning Tuesday of last week, I had my first opportunity to go to a Junior High School (one I was actually teaching at I mean…) Unfortunately, for Tuesday, I had absolutely zero classes! I can tell you, I was immensely bored. But don’t worry, it got better, Wednesday came around and I finally got to go teach a…oh wait nothing this day too. How do you fight the boredom you ask? I’ll tell you! A good book, wandering around, asking teachers questions you don’t really need to ask as an excuse to engage them in conversation, and visiting clubs! That’s right, clubs! What a blast this week was. Tuesday I was wandering outside and heard some band music, so naturally, I hunted it down and completely interrupted the band club’s practice. Wouldn’t you know it, they were practicing ‘Entry of the Gladiators’ (more commonly recognized as ‘that circus song’). They actually sounded pretty good, given the fact that the song isn’t all the easy. After this event that I can only assume was sight reading, they switched to marching instruments, stood up in the classroom, and blew me away with some magnificent jazzy marching tune. I was utterly shocked. All memorized for the record. (I’d like to take a brief second to describe this ‘band room’. It was essentially a large classroom that had egg cartons strung together with coat hangers for sound proofing.)

Anywho, they were great, that was Tuesday. (I ended up staying a bit late that day) Wednesday was a bit funny. One of the teachers asked me to look over some English speeches that some students would be giving for a speech competition coming up. Misunderstanding, I went through all seven of the speeches correcting all of them. I was blown away that two of them were nearly perfect! (A couple were obviously written by students…or so I thought…) Turns out, all of these speeches were supposed to be final products provided for the kids to RECITE only. So I corrected about 7 papers that were supposed to be good to go. Oops. When I showed the teacher the color practically drained from her face…she felt so bad that I had thought she wanted me to correct them.

Either way, with that out of the way, it was time to listen to the kids attempt to give their speeches. For the most part, they sounded pretty good, and for a ‘low level’ school, they were remarkably close to being on par with those hyped-up ‘wonder schools’ they show you during orientation. So that was Wednesday.

Thursday was my first actual time with a class for Junior High! It was wonderful. The teachers had it planned out that after I gave my introduction. the students would give their own introductions in English using posters they had made. This was a lot of fun! It kept the kids engaged, I was able to learn about them, and I didn’t have to spend the whole time talking! I had a grade sheet of my own to rate all the kids on their speech, memorization, posture, and attitude. Twas a blast. After all of my classes, I stayed late to visit the ‘table tennis’ club. It was pretty interesting to watch, they are freaking incredible. I got a chance to volley a little bit with one of the students, but no score was kept. (No I didn’t get decimated.) Then, as I was about to leave, the small cute little teacher that sits next to me in the teacher’s room stepped up to the mound against the ping pong teacher. I nearly crapped my pants. It’s JUST LIKE THE MOVIES. WHOAOAOAO. So in closing…Thursday.

Friday was just like Thursday, more classes, less boredom, and more talking with students. After class Friday I helped two of the English teachers with one student each perfecting English speeches that they have to record and send in for a bigger speech competition. The first girl, did very well. Her speech was about ballet, and with a few pronunciation issues and tonal inflection corrections, she should be well on her way to getting in to the competition she’s applying for.

The other girl did a good job too, but she over pronounced a lot of words. It was funny because it actually reminded me of how a know it all snoody girl would talk like when she was being all ‘matter of fact’ ish.

The real shocker of the day was this; The marching band had a competition on Sunday, and I wanted to go. So I asked an English teacher earlier in the week about where it was, and after helping his student with her speech, this guy gave me the most detailed set of instructions on how to get to the competition, and a ticket that he had purchased for me. It was truly too much, but I couldn’t really turn it down, so I graciously accepted it and left the school.

That my friends, concludes the week. As for the weekend, all I’ll say is this; It was fun, extremely expensive, and if you want the stories (which are on the cusp of legendary) you’ll just have to ask me.

On a sad note, I completely missed the band competition, and I’m very upset about that. I don’t know what to say next time I see the teacher…sigh.

So MONDAY! Yesterday was fun…ish. I woke up feeling a bit under the weather, went to Kansyu Elementary for the first time this year. The kids were little angels. I even ate lunch and played dodgeball with them. So fun. Like a ninja, I snapped a quick picture of the school grounds when no one was looking. So here’s your typical Japanese Elementary (or Junior High) school (they look the same): 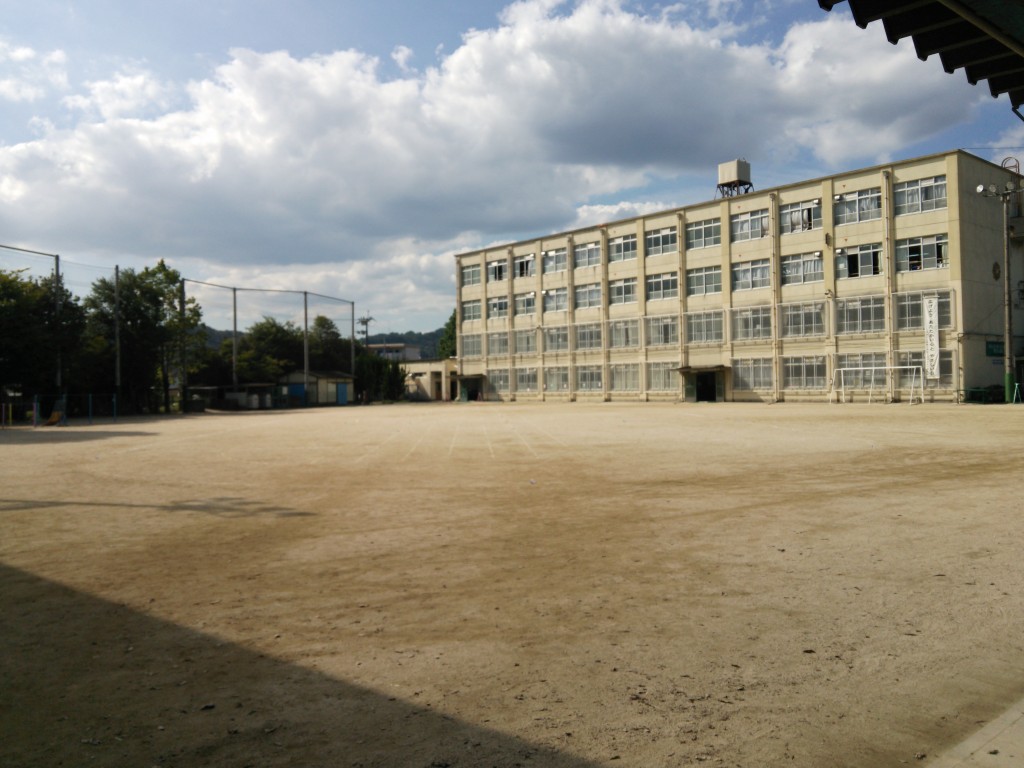 Tuesday (today) has been a bit more rough. I slept terribly last night because I am quite thoroughly sick (I rightfully blame my weekend). My throat is killing me, my nose is stuffed, and I feel worse than I have in a long while. That being said… I totally rocked it today. Take that sickness. On the downside, the 6th graders at this school were a little less well behaved with their questions. The kept asking me how much I weighed, if I liked Hamburgers (most likely related, Japan is probably a bad place for someone who is insecure about their weight to be [which I’m quickly discovering I am not]), and one class kept trying to kancho me. It was my first experience with a class where the teacher was late…which is to say, I ran the first 10 minutes of that class flying solo.

September 21st is Kansyu’s Physical Education festival (called undōkai, which means ‘sports day’ I guess), and they were out in the field practicing some stuff the you would normally expect high school cheerleaders to do. THE ENTIRE 5th and 6th grade class, doing crazy acrobatic stunts, throws, and other magnificent things. It was amazing.

So today’s plan, go home, sleep, hope I’m not sick tomorrow, because it really makes the day less awesome when you feel like collapsing in the corner.