Hello again! It’s been quite a while! Sorry for the lack of updates, I’ve been this magnificent blend of lazy and busy, and miraculously found myself in a state where I uh, neglected my blogful duties. Alas, no longer can I maintain this blissfully lethargic lifestyle.

So it looks like I last left you all on a terrible ‘I’m totes sick’ cliffhanger, and for that, I apologize. It was a rough week though… I continued teaching both Wednesday and Thursday much to my discomfort, and Thursday afternoon I had to go to an all ALT meeting at the general education center. Every so often we have these meetings where all the ALTs in Kyoto get together and talk about important stuff. The September 12th meeting focused on volunteer opportunities, employee benefits, pension info, and travel expenses. Twas a joyful time indeed, especially because I looked like this:

The other reason it sucked had something to do with the fact that I literally could not talk. I don’t just mean I lost my voice either… I legitimately lacked the ability to communicate effectively enough to speak in a meeting (I tried though), and there was absolutely no chance that I could possibly talk over a class. Because of this, with the help of Mr. Kawaguchi (The bosses’s boss) I called my school and informed them of my inability to work the following day, which I then used to go to the doctor and get medicine.

So! First doctor visit in Japan! I was told there was a Doctor (Dr. Yu) who works at a Clinic just a short walk away from the Saiin train station. So, to get there, I walked a kilometer, hopped on the Keihan Uji line for 4 stops, transferred to the Keihan main line at chushojima for 11 stops, got off at Gion-Shijo, walked to Kawaramachi, got on the Hankyu line for 4 stops, and hopped off at Saiin, where I proceeded to wander around for a while until CJ (the other Johnson) send me a pin of exactly where the place was. Concisely put, 2 hours later… 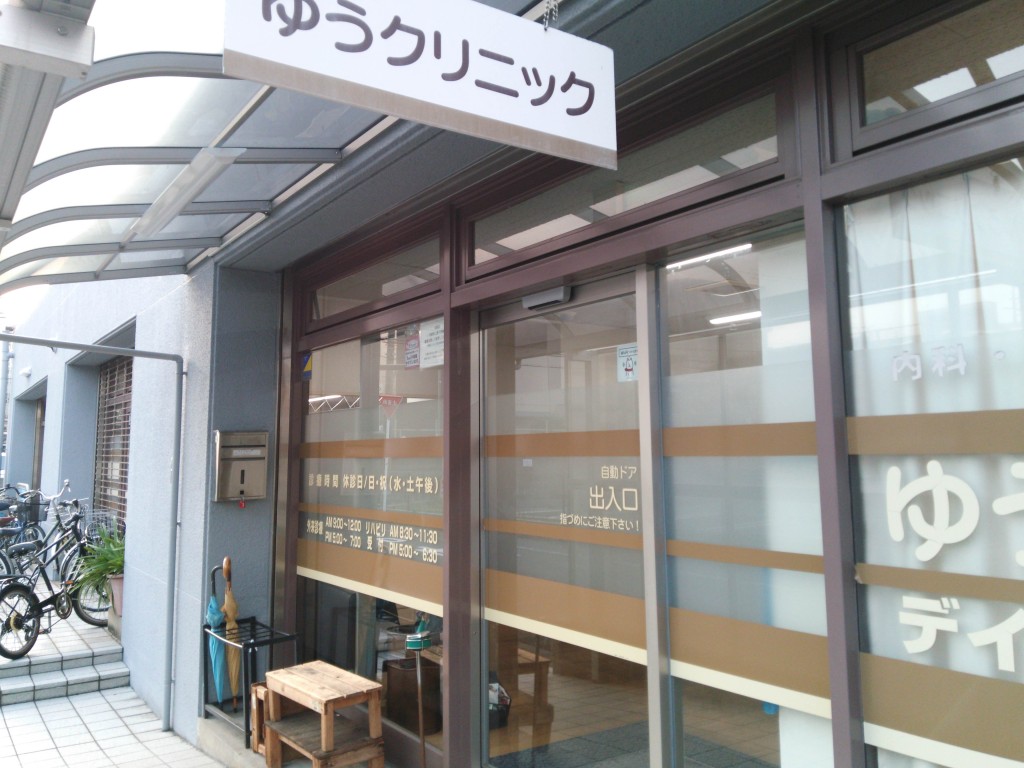 After a shaky conversation featuring Japanese, English, and something in between, I was proscribed 3 different medicines and sent on my way (I spent about $35 total, $20 for a doctors note to my school, that’s normal here. I got home, took my medicine, and spent Friday, Saturday, Sunday, and Monday in bed doing nothing (save for some Okonomiyaki with my JET neighbors Monday night).

Oh yes, I tried this.

Come Tuesday, I was back into the swing of things! Fun! Tuesday I spent teaching the kids colors, shapes, and directions. For the colors and shapes I had them play some ‘what’s missing’ games, as well as my new, super effective, ‘run around the room and do something’ game (Working title). Basically I put a different shape of a different color in each corner of the room and call out aspects of that corner (i.e. ‘Red Star, or ‘Green Triangle’, etc….) The student would then have to run to that corner and do whatever action that spot required. Red star was spin, green triangle was clap, black heart was squat, and orange circle was jump. The kids love that stuff (which makes learning fun! yay!) For the 6th graders I had a bunch of different locations printed out and laminated for sticking to the board. after teaching the kids the directions, we played ‘Simon Says’. After that, we practiced the city plan. The would start on a road (in their books) and I would say..’go straight, turn left, go straight, turn right, go straight, turn right, go straight, turn right, where are you?’ Once they got the hang of that, the next step was to make it fun..ish. So I asked for a volunteer, and called him Mario in my best Italian accent (which is terrible). I then had him close his eyes while I drew crude pictures of cat, cars, and princess peach under each of my locations. It was then up to the rest of the class to lead Mario to the princess. They almost exclusively led him to all the wrong place with picture intentionally (at least they’re learning!)

The rest of the week it was Ritsuryo JHS, at which I had yet to give my self introductions. So I did, to most classes at least. It was lots of fun. On a slightly less awesome note, third graders at JHS (America’s Freshman) are a real pain some times. In my first freshy class, I had to deal with this crazy loud miscreant who was trying to shout over me the ENTIRE PERIOD. THE ENTIRE PERIOD. Since Japanese schools don’t have a place to send those monsters, I had to try to deal with him on my own. Suffice to say, mission accomplished (peer pressure doesn’t have to be a bad thing). The rest of the kids were pretty good.

The following weekend was pretty nice, Friday was a night off, Saturday was clubbing in Osaka (we ended up going to 3 different clubs, ugh), and Sunday was a lovely day full of siesta. To make it all sweeter, Monday was a ‘bank holiday’ which for some reason means there is no school! So what did I do? I’ll tell ya, after a short side note.

Back home, a real Sunday night football game day was like this. Wake up, have a nice relaxing breakfast, go to church, pig out on some crazy lunch, have some friends come over, have a beer or two, grills some burgers and brats, and watch the game on a huge tv. Now, back to Japan… SUNDAY NIGHT FOOTBALL! er.. MONDAY MORNING FOOTBALL!
Gameplan:
7:30am- wake up
8:00am- leave home
9:15am- arrive at Darren’s tiny apartment
9:30am- watch the kickoff on his tiny little laptop screen (not in full screen cause the laptop has seen better days)
9:45am- Eat eggs, and drink orange juice
9:45 on… gloat at how awesome the bears were playing.

No beer, No brats, sad times. WHICH WAS IMMEDIATELY FIXED. We decided to celebrate our Bears victory with a trip to Lake Biwa, which consisted of sweet, tasty, delicious, beer. Yay life. Also, for the record, I was talked into helping some Japanese people get their shuttlecock (yep) out of a tree, and they thanked me with fried cheese and almonds. What a world.

There isn’t all that much to report from last week, it was pretty tame to be honest. I taught at 3 different schools, Daigonishi, Ikedahigashi, and Kansyu ES. Again, kids, so freaking cute. I wish I could post pictures (Kyoto-shi has instilled the fear of ultimate doom should we social media any pictures of our classes). Anyways, I’m loving it here so far.

This past weekend was super relaxing… I did almost nothing. It was delightfully inexpensive, which is a nice change of pace. Sunday, on a bit of a whim, I joined a few others and climbed up Daimonji. (Remember that cool flaming mountain? same one.) Picture below: 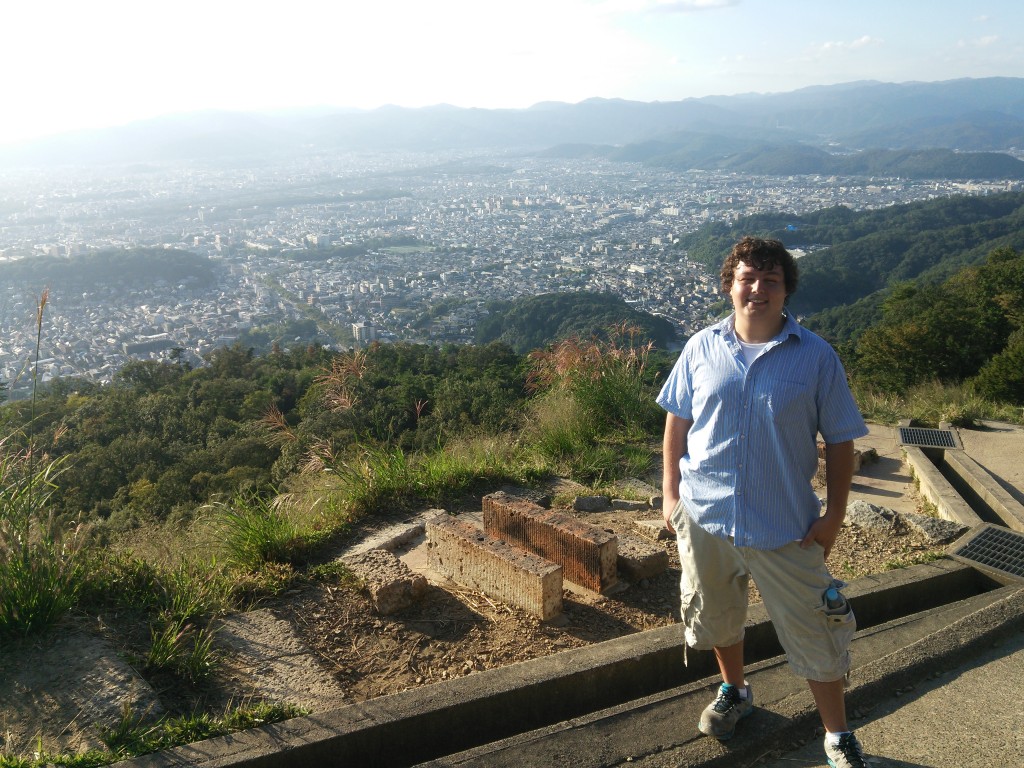 So this week, Monday down, Tues-Fri to go. Planning on trying shabu shabu this weekend, I’ll let you know how it goes. Missing you all!