Things have been interesting these past couple weeks, and I think I’ll kick it all off with the Thursday, the 24th of October.

So here I was, sitting in my apartment watching some form of video media when lo and behold, the doorbell rings. Who was it? Amazon! My Halloween costume had arrived! Hooray! Or so I thought…. The dark tragedy that consumed me immediately after could only be described as a soul crushing one, for my costume was easily two sizes too small. TWO SIZES. This costume, according to the measurements the seller provided, should have fit perfectly, maybe even have been on the big side. But no. Tiny. Thus began the terrible pre-halloween extravaganza.

Fortunately, the rest of that evening went without incident. The next day (friday) turned into one of those days where nearly every possible little thing could go wrong. Forgetting chopsticks for lunch. Not having your battery charger, the convini not having any decent lunch food (which if you lived here you would know is unheard of), missing the train by 10 seconds, running out of black socks, the woman in front of me at the ATM taking 20 minutes, getting random calls from strangers, the school teacher having a meeting that no one told you about, phone dying, bugs on your computer, late food, being exactly one yen short of exact change, and so on… it was truly magnificent, nearly artistic, the way this day was forming up. Needless to say, I was in a bit of a funk. After work, I tried to call back the random number I had received a call from and it was answered by a magnificently quick speaking woman from who knows where. After about 10 minutes of Japanese phone conversation failing, I told her I would call her back with a friend who is actually competent when it comes to speaking Japanese. Unbelievable, I was pretty much spot on with my theory on what she was actually saying. It was the company I ordered my snowboard from asking when I want it delivered. Fancy that. So anyways, after embarrassingly asking for help from Blake and Naoko again (I really owe the two of them, they’ve saved me quite a few times) I finally got all the shipment details worked out. So next: food. I had to be near Sanjo (inner city) around 8 for pub trivia, so I was in a bit of a hurry for dinner. I decided to order pizza, which, in the interest of time, I tried to do from my laptop before walking back home. This is where the bugs came in. It was a bit dark, and I set the laptop on a ledge to type in my order. Unfortunately, the ledge was crawling with some sort of monstrous creature, and a fair number of them got onto my computer. Eventually I got the pizza ordered. Sweet. 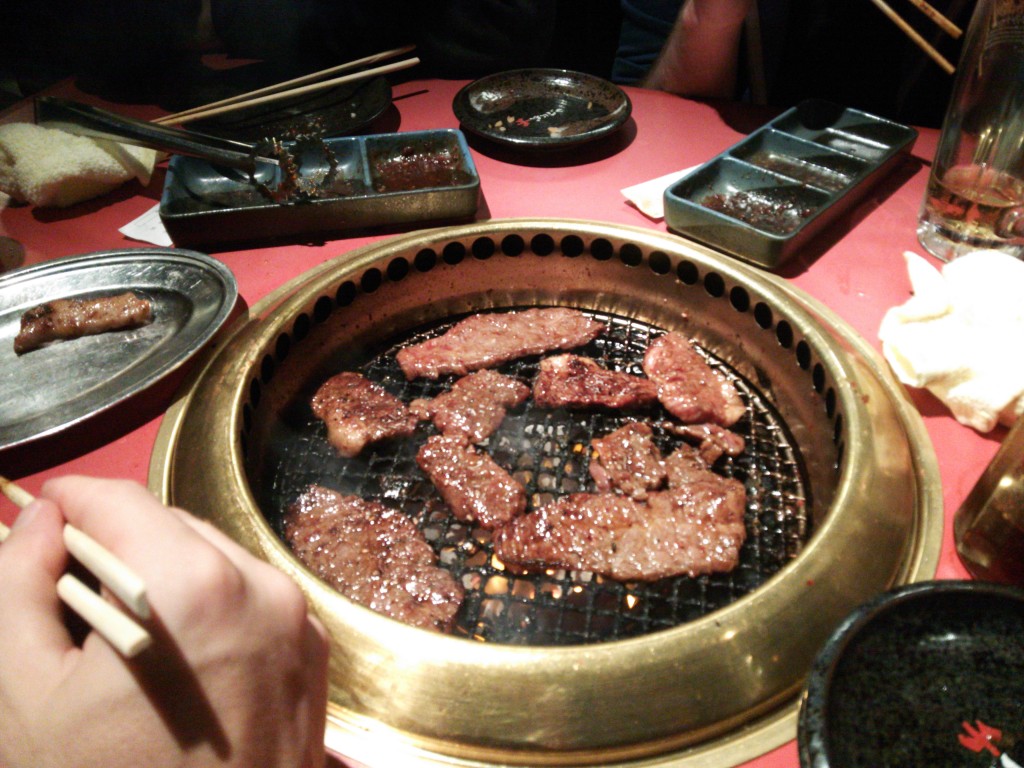 Infinite Meat and Beer (for a time)

So Saturday, I was feeling very ill from the night before (I blame poorly cooked food on my part), and still without a functional Halloween costume. I spent about 4 hours searching, but nothing fit me. Not even the ridiculous emergency Elton John blazer that I thought was a sure bet. So my plan? being Mario in a bath robe. (I know, terrible) I actually went to the train station looking like that. Never again.

After all was said and done, I met up with some JETs on the train, who immediately proceeded to save Halloween for me. A few costume tweaks later, Midget costumed Mario was born.

We went to a place known commonly as Amerikamura and I got my first dose of awesome halloween time in Japan. I can’t describe how amazing some of the costumes were. It was incredible. Here I am, in this two size too small Mario costume surrounded by some of the best costumes I have ever seen in my life, and it was still an awesome night. (Probably because of my mustache and ridiculous blue aviators [thanks three lakes ace hardware!]) I ended up playing pool with an old Japanese dude in a polka dot dress, a lumberjack, a mariachi band guy, and a pirate until about 5 in the morning, good times.

So that was Halloween, good times to be had by all, and despite an overlying feeling of misery, still awesome. Oddly enough, the next week (which I expected to be a real pain given how I was feeling) turned out to be one of the best weeks I’ve had teaching yet! Happy Matt.

Due to previous rain cancellations, one of the schools I was teaching at was having an Undokai. Now an undokai is really something else. The word means ‘sports day’ essentially, and that’s exactly what it is. BUT INCREDIBLE. It started in the morning with an opening ceremony, where all the kids danced to their warmup song in adorable student fashion and cheesy procession music was played (a lovely reminder of home) while happy parents record every bit on their incredible expensive looking cameras.

The opening ceremony also included the each of the two teams’ fight songs, which were quite literally awesome. It was this magnificent chant/song thing with all sorts of choreographed moves and acrobatic flips and stuff. THIS IS GRADE SCHOOL. ACROBATIC FLIPS. All to the beat of a merciless Taiko (drum). It was really impressive, and no, the awesomeness doesn’t stop there. Event number one was this ridiculous race between the red and white teams’ 3rd and 4th graders. To the sound of goofy music playing on the loudspeaker, scores of kids started this race by putting their foreheads on baseball bats and spinning three times. After that they dashed to a net, which they had to crawl under (half got stuck…priceless), then a mad dash to an envelope explaining what they had to put on the tennis racket as they ran through the next length. Once each wave finished, the next started. Magnificent. Heartwarming sidenote, the handicap kids did it too. Even the ones who could barely walk got a chance to hurry as fast as they could through the obstacle course. The classmates raised the net up high for the kid who physically couldn’t crawl under it. I’ll tell you right now, from the incomparably joyous smile on the faces of these kids, they wouldn’t have it any other way. Beautiful.

The second event was a relay race for 5th and 6th grade, followed by a goofy race put on by the 1st and 2nd graders. For my coworkers from Grant back home, Cherry Bon Bon was the music for event number three. After the third event the cheer leading club hit the floor and did their thing. The fourth event was another relay race. Event number five is where things got even more awesome. It was this massive tug of war game played with giant bamboo poles. Each team would start at either end of the field, and when the gunshot went off, they would sprint towards to middle to grab one of these poles in tug of war fashion. Once they got their poll back to their side, they could run back to assist their struggling team mates. It was really cool to watch, and red team totally dominated (the underdogs I was rooting for). Event 6 was this ‘toss the ball in the net’ game, which was taken to town by the red team 3rd graders, who nearly doubled everyone else consistently. Event seven can best be described as… umm, towers? To the tune of slow, intense music the kids (5th and 6th grade) made a multitude of human towers, and performed a ‘beautiful’ (as the principal described it) choreographed display of strength and coordination. They were able to stack 5 people high. AT ELEMENTARY SCHOOL. After that, there was a closing ceremony and everyone ate lunch. Good times.

The rest of the week was just a bunch of good times at my schools. The classes went well, the lunches were fun, the students were good, and the teachers were awesome. At my favorite school I spent an hour or two just goofing off with teachers. I ate a fire baked sweet potato, which some teachers made just because. Side note, Japanese people say sweeto potato. Sweetopotato. I can’t get enough of it. I have a recording:

Anyways, the teachers at some of my schools really just make life awesome. They’re good people, fun to talk to, and always lead to interesting conversations. For example, animal sounds:

Anyways what’s next? My snowboard showed up the other day, a teacher learned I could cook ton katsu and told me it will make me fat, I got all my winter stuff and delicious cookies from my parents, and I totally lost my phone on the train. In a city. Needless to say I was less than happy the next day, however through some miracle of Japan, I got it back. That’s right, I got my $800 phone, that I lost on a city train at 1am, back the next day. Take that Chicago.

Side note, Izakayas and Yakiniku. Two wonderful things that America needs more of.

To wrap up this delightfully long post, I’d like to briefly mention the past two weekends. The first Friday night I went out for okonomiyaki with some co-workers from one of my schools, and had a great time. The next day was a birthday party in Osaka for a new friend, where I met a guy with his hair cut to look like sunglasses on his head: 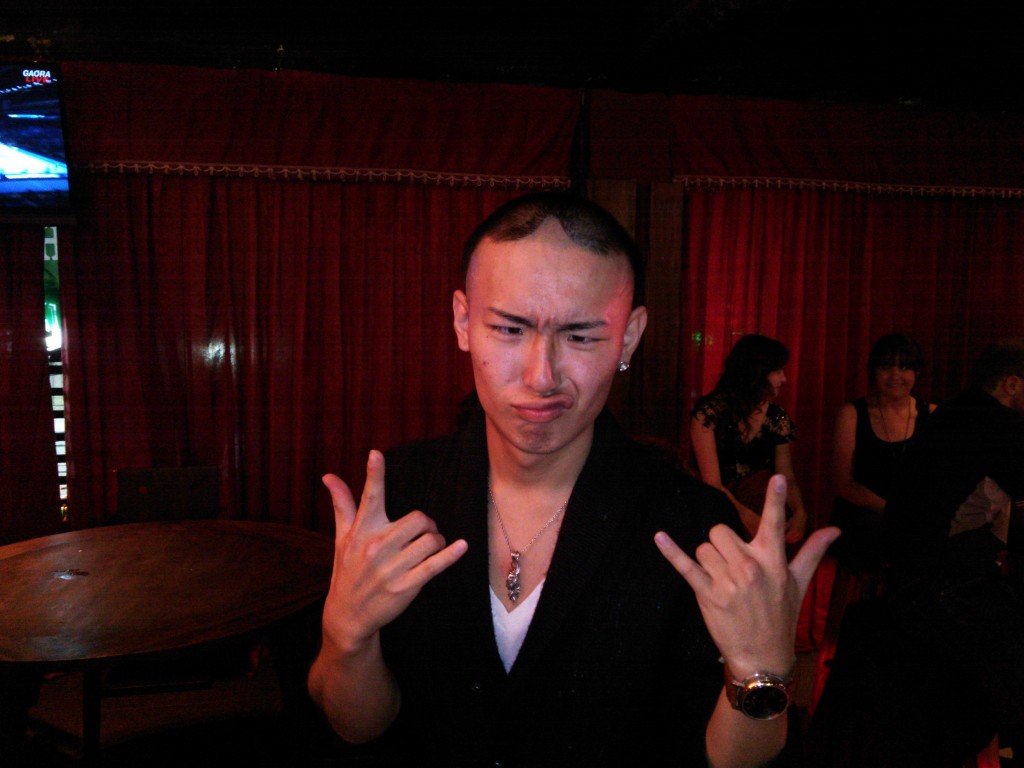 You wish you were this cool. 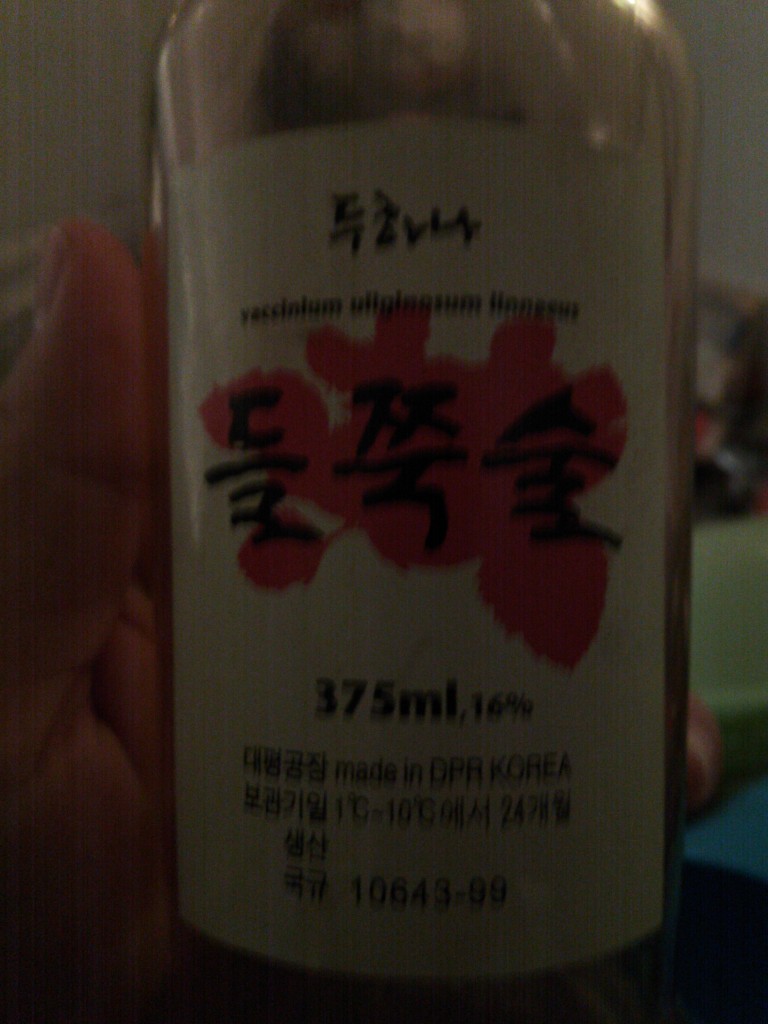 It smelled like straight whiskey, but was surprisingly tasty.

Sunday consisted of sleeping and another one of those delicious Hawaiian burgers.

The following weekend (after a week of introducing kids to jeopardy [huge success]) was less eventful, with two minor exceptions. I totally got this badass tv:

and this badass oven/microwave thing:

So ya, that’s life as it is. Living the dream. Also, it’s cold. Japanese schools don’t have heat.