Hello again everybody. I suppose I have a lot of updating to do once again. Many things have happened since my last post, and almost all of them are good! What a lovely situation to be in! This blog is actually a bit old, but this is the first real chance I’ve had to upload everything that needed to go with it. Expect the Christmas blog sometime tomorrow. That being said, Let’s be about it shall we?

It all starts out with the loneliest Thanksgiving of my life. I ate leftover food alone in the dark in my quiet apartment. Living the dreeeeeaaaammm. Seriously though it wasn’t all that bad. I will not pretend for a second that I don’t miss the good times back home during this season, but you know…when in Rome…

I spent the next week running the gauntlet of elementary schools, a new school every day certainly keeps the week fresh. Tuesday, the 26th of November gave me a lovely opportunity to have a nice long chat with one of my JTEs at the one school where I felt the least amount of connection with. Needless to say, since then my opinion of days spent at that school have significantly improved, and I actually received my first invite to an Onsen! (Those public baths where everyone gets naked together). Due to a prior scheduling conflict, I had to decline the invitation (which I should point out was actually an all inclusive spa kinda deal). Next time spaland of Japan, next time.

Anyways, thanksgiving was uneventful, but I did have the delightful opportunity to go do another one of those Yakiniku all you can eat kind of deals, and let me just say, I crushed it. So much food. SO much food. SO MUCH FOOD. It was like the Brazilian steakhouse all over again…except…Japaneseish. I had to complete the night with a powereating last hurrah which subsequently left me full for the next day.

I was very happy to have a chance to visit some Shrines during the fall changing of the leaves, and I have to say, it was beautiful. I have never seen such a vibrant display of autumn in my life. There will most assuredly be pictures of this. With the group I ended up going to two different temples. One of them, I cant remember the name for the life of me, but it was a night visit and many of the leaves were actually illuminated. It was very cool.

I get the feeling this part hasn’t been illuminated like this for hundreds of years.

The second temple was called Yoshiminedera, and it was spectacular! The leaves…what a sight. Getting there wasn’t all that difficult either. It was about an hour worth of train rides followed by a 45 minuteish bus ride up the side of a mountain. Definitely worth it. I purchased my very first stamp book! It turns out that the thing to do around here is to get this super fancy stamp and calligraphy done at every shrine you visit and get it put in your book. Like this: 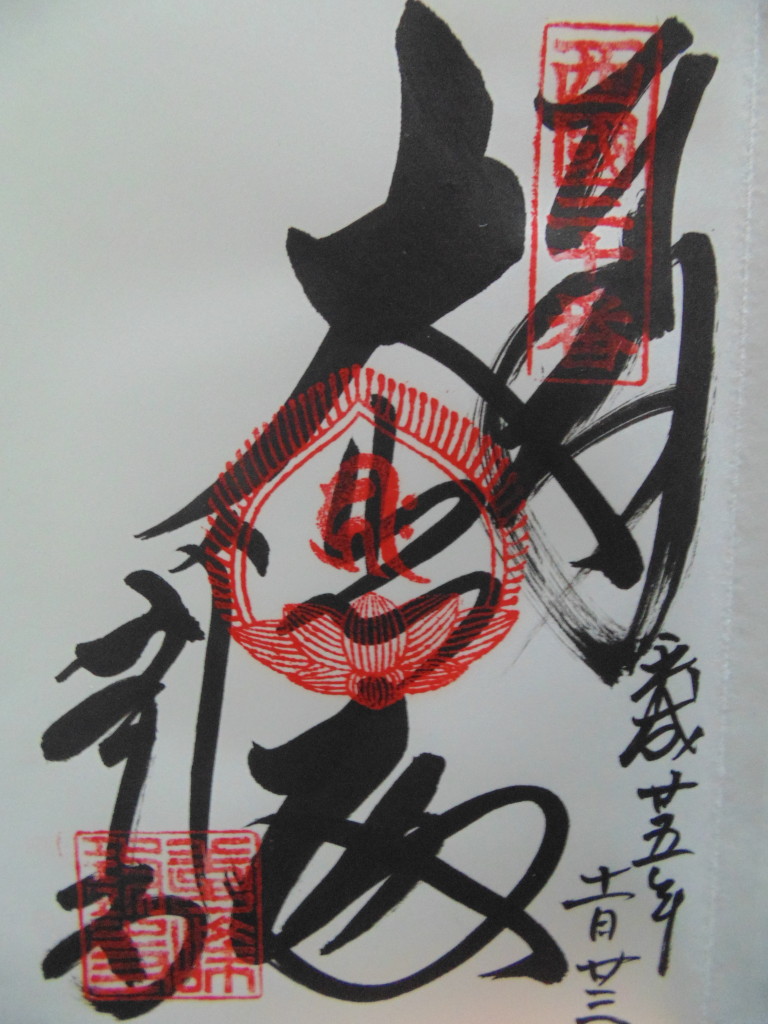 I think it says ‘Moose’

After another delightful week of teaching children about English (this week I introduced my ‘Obama’ line of Mood pictures), I reached the magical day of Friday. Not just any Friday either. This was my first time going to an Enkai type party here in Japan, and it was with the people the Kyoto city board of education. Hot damn, it was awesome. For starts, there was a freaking beer dispenser. I mean like…this thing was gold. Check it out:

Essentially this place was a buffet, all you can eat and all you can drink for about 3 hours. Even the drinks were buffet style, we had free reign of a fully stocked bar, and between the ALT’s and the BOE staffers, we easily polished off enough alcohol to drown a whale. It was as this bounenkai (end of the year party) where I met a few of the younger girls from the BOE, and learned a new Japanese word…gōkon (合コン), which is essentially like…blind dating group style. This was all learned the following day of course, and I spent a couple minutes looking like a complete idiot when I didn’t understand what the BOE guy was talking about. Especially when he pointed to myself, another ALT, and the two young single girls from the BOE and started spouting off all these new Japanese words. Embarrassing. Also played a drinking card game in a restaurant for the first time in my life, and learned that people here like to party hard.

The evening certainly panned out interestingly enough, and after slamming a few beers with all the important people, I headed off to karaoke (with a bunch of BOE people). Karaoke was…well, it was a lot of fun, and the evening ended in the most memorable of ways. (The internet can’t handle this story)

The next day (which I can proudly states did not even remotely consist of anything resembling a hangover) I headed into Osaka for an ALT’s birthday dinner Outback Steakhouse. Apparently they have Outback Steakhouse here in Japan. Very similar to back home, it was an alright steak. BUT IT WAS ALSO A FREAKING STEAK. Needless to say I was exceptionally happy to eat it.

So then, another week of teaching. This week I started doing my Christmas lessons for the kids, and showed all sorts of pictures of Christmas and New Years in the states. The highlight of the show, definitely the Christmas light shows those crazy people do in the winter. The kids were also extremely surprised to hear that we in fact don’t eat KFC for Christmas dinner. Apparently that’s a huge thing here, I dunno if I mentioned it. The santa colonel sanders statues are pretty terrifying. 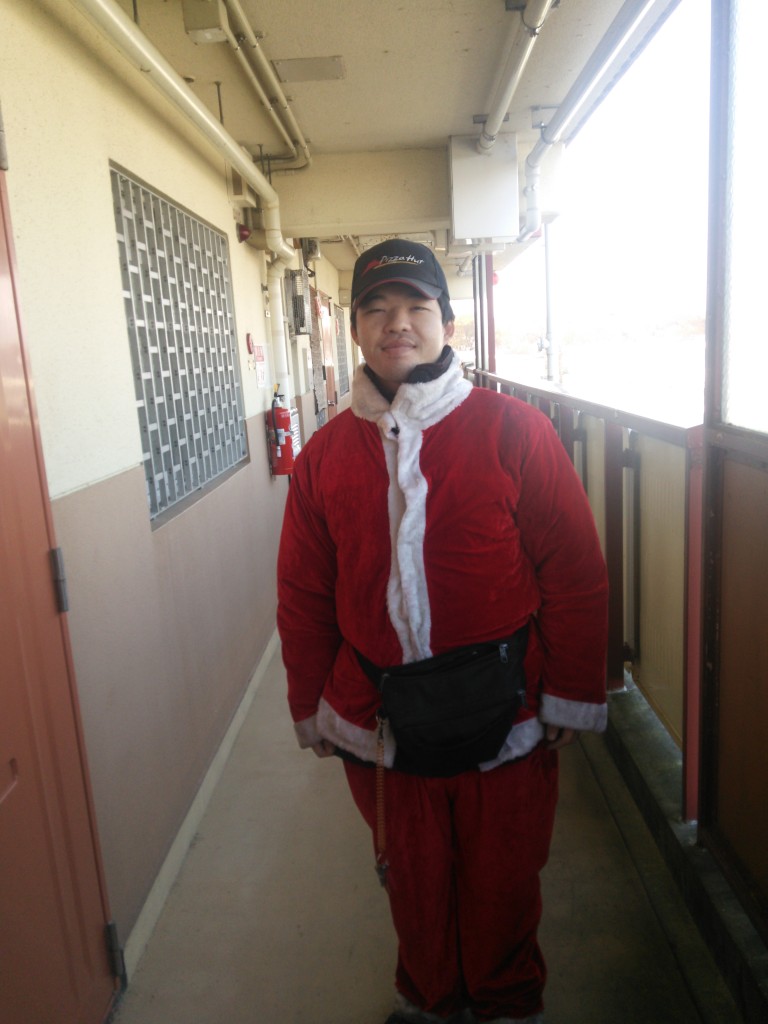 After teaching them about all sorts of lovely Christmas traditions, I had them make cards, and let them choose from a list of 5 where those cards would go. 1. Their Family, 2. Their teacher, 3. Their friend, 4. An American Student, 5. Obama. (they ate that shit up, and the white house is getting a fair chunk of cards). I should point out… these kids are CRAZY good at drawing…see below. 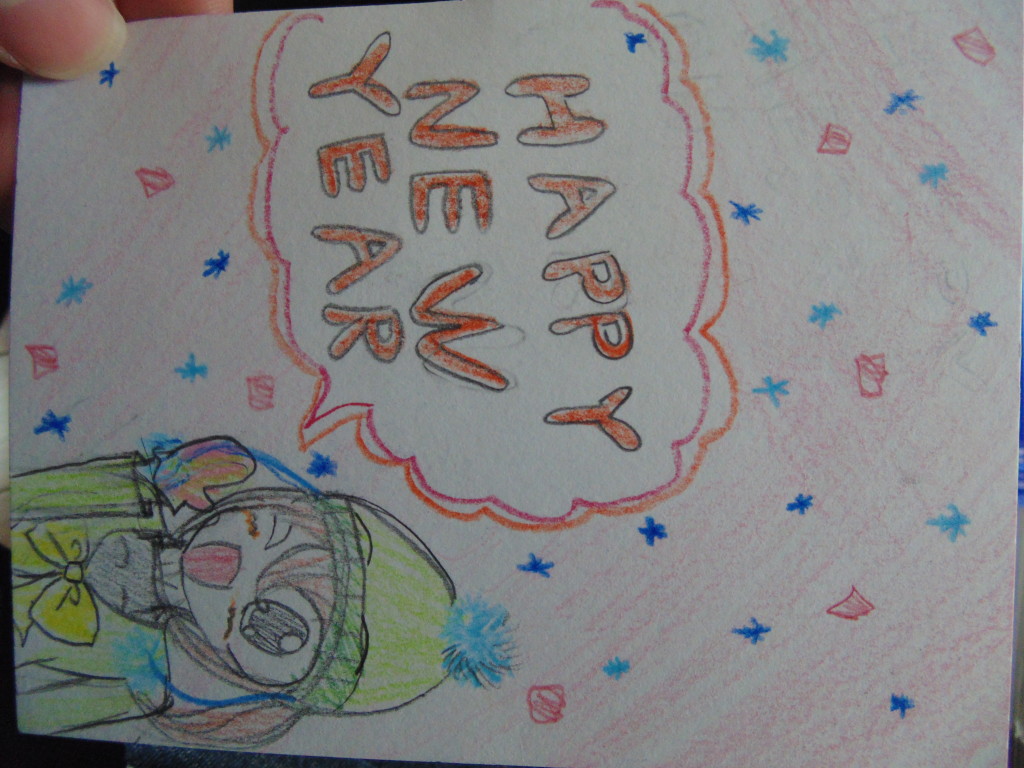 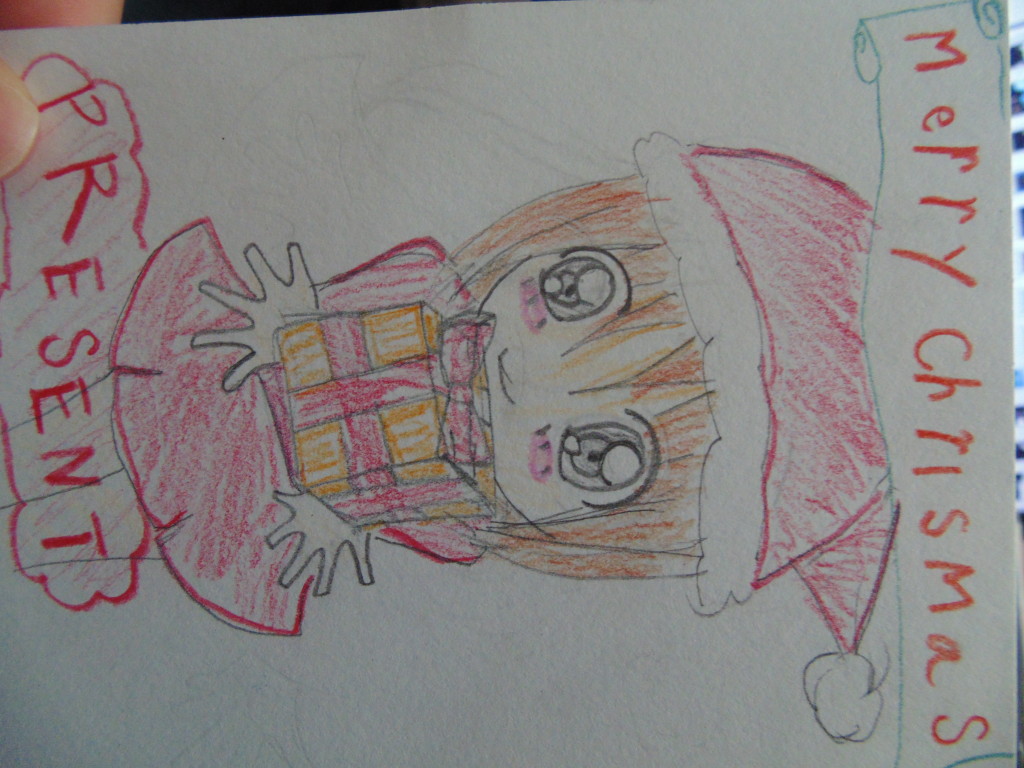 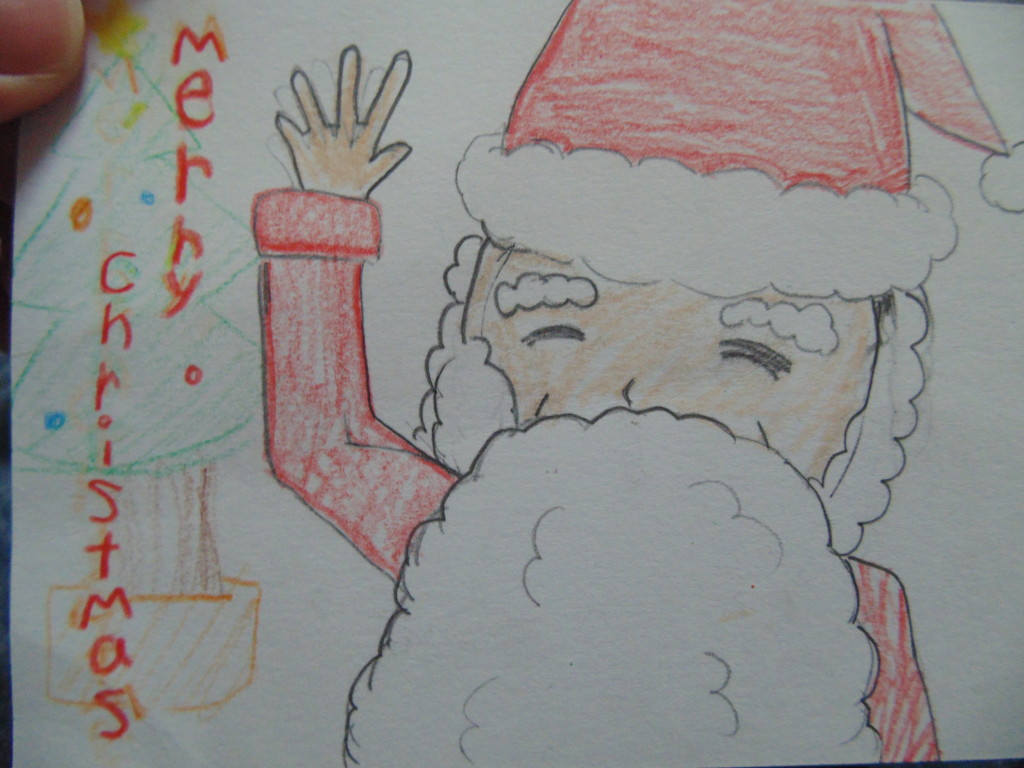 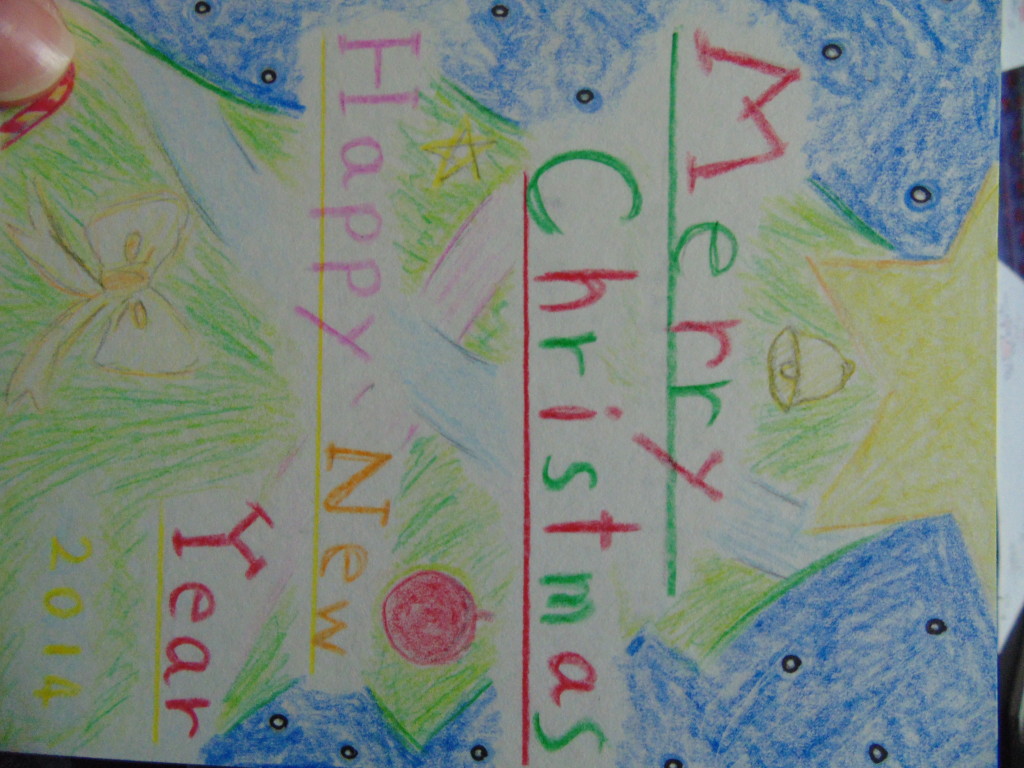 That brings me of course to this past weekend, where I made mochi and celebrated a delightful team birthday party in the happy land of Osaka. Mochi is this Japanese seasonal thing that we often refer to as a ‘rice cake’. It’s essentially rice beaten into a mush, then possibly (I’m not actually sure) cooked with some other ingredients to make a delicious little snack, which I literally had to stop writing this blog entry to eat in the staff room here. (They totally hook me up with Japanese culture at this school, I love it.. WHICH REMINDS ME I totally got to participate in my first ever Japanese tea ceremony at this school and it was awesome. There’s pretty much a special way to do everything, which adds a certain level of depth to the whole procedure, sorry, long tangent [it’s what I do])

His head was not an ingredient

So that’ll do it for this one, expect another post remarkably soon.